Las Vegas played host to Amazing Comic Con for the 5th year this past weekend. This was my first time attending a convention in Las Vegas and my first trip to the city in nearly five years. I rolled into town with my wife and my buddy (who’s never attended a comic convention) late Saturday morning and we were browsing the exhibit hall by 11:30AM. 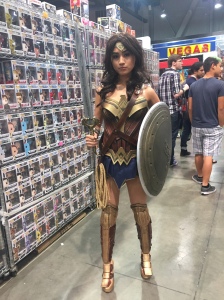 I wasn’t sure what to expect with the bag check process because most bags had been banned a week before the con but a few days leading up to Amazing Comic Con, that policy had been changed to all bags allowed. If you didn’t have a bag, you can enter the convention with no waiting but the bag check process itself wasn’t bad. The convention security made the process quick and smooth, I never waited for more than a few minutes. Once into the exhibit hall, it was packed wall to wall with attendees. Again, I have no reference to compare this with other Vegas conventions but if I’m comparing it to the Amazing Comic Con that was previously in Phoenix, it was much busier than I’ve ever seen Phoenix. The most prominent comic book guests were staged right at the entrance of exhibit hall (which featured Todd McFarlane, Rob Liefeld, and Kevin Eastman) and artist alley to both the left and right sides of the exhibit hall. It was a great mix of vendors, guests, and comic creators (both local and national) and every aisle was full of attendees. The cosplay that I saw roaming the hall or the lobby was pretty good however, I noticed the percentage of attendees in cosplay was smaller than what I’m use to. I’m not entirely sure if it was the hot weather or if the Vegas cosplay community isn’t as large but either way, I thought there would be more. That didn’t stop me from finding some awesome cosplayers however!

I didn’t stand in many lines over the weekend but there were a few. It looked the lines moved smoothly but without having experienced one this past weekend, I can’t really confirm/deny that. The one that I wished I had been made clear (maybe I missed it) was that the main stage panel room was going to be cleared out for the McFarlane panel and the Stan Lee panel. I understand VIP access to those two panels existed but didn’t know the room would be cleared before hand and the lines for the panel had already started. Not that big of a deal because I adjusted to it but the more communication the better. Speaking of panels, the panel lineup on the main stage on both Saturday and Sunday was really good. Something that Amazing Comic Con does well is that they keep the focus on comic books but know how to sprinkle in the right amount of media guests that have (or still do) play a part in current pop culture whether that’s film, animation, video games, and so on. The main stage featured guests from different corners of comics and pop culture that you could easily spend a good portion of your day in the one room and be completely entertained.

I know for the most part who the show runners are for the majority of the conventions I attend. I will occasionally see a show runner out and about but some recognition is due for Jimmy from Amazing. I see him constantly checking in vendors, artists, attendees, and guests to make sure their experience is a positive one. Overall, I had a good time at Amazing Las Vegas Comic Con. The con is exactly what is claims to be, a comic book convention that celebrates the architects of pop culture. When you know what you’re going into, you can set your expectations accordingly and because of that, I’ve never been disappointed when attending an Amazing con.

For photos from the event (and until I get around to paying for more storage on WordPress haha) you can check out the Legion of Sand Instagram account. I will also be sharing a few high quality photos that my buddy took during the spotlight panels with his DSLR camera soon so make sure to follow Legion of Sand on Twitter as well!