The awesome thing about going to so many different conventions is that your bound to meet cool people when your in line or taking a picture with them.

One such person for me was Emilie Bada-BOOM, a cosplayer who was super nice to take a picture with my kiddo at Wondercon in her Raven costume.

She was just recently at Anime Expo and will also be attending San Diego Comic Con. Check out her interview and then head on over to her Facebook page!

LoS: How long have you been cosplaying and what gave you the inspiration to do it?

EBB: I started cosplaying in 2011 for my first convention which happened to be SDCC! It was the year the website crashed time after time, I purchased the tickets for my friend’s birthday and we all had our first Con experience that summer. I always enjoyed dressing up and creating my own costumes for Halloween or for community theater projects, so cosplay was a natural progression for a nerdy girl! I started off slowly, mostly just attending SDCC but lately I’ve been branching out and trying to travel to other Cons as well.

LoS: Have you had any memorabilia moments cosplaying?

EBB: I honestly can’t say I’ve had a negative experience cosplaying (*knock on wood!*) but some of the most memorable for me were my first Con experience. We didn’t know anything about Hall H or the crazed lines, we didn’t get the exclusives we were aching for, but so many people were so positive towards our noob cosplays. We met so many people, and I think the networking has been the most memorable moment for me, I’ve definitely made life-long friends at conventions. One of the most memorable adventures for me was meeting Stan Lee. I know he’s very public with meeting fans, but it was an amazing experience nonetheless.

EBB: I’m a HUGE X-Force fan. I love Rob Liefield for creating two of my favorite characters (Domino and Deadpool!) but it really was the unsung writers that gave Deadpool his wit and personalities which later helped progress Domino’s character development as well. Of course I do have a signed New Mutants 98 signed by both Liefield and Stan the Man, so he will always be a big influence for me. I had the biggest freak out during XMen: Days of Future Past when I saw Cable the first few moments of the movie. Fox better get on making an X-Force movie quickly enough for me to audition for Domino! 😛

LoS: What can we expect to see from you at San Diego Comic Con?

EBB: At Comic Con this year I’ll be cosplaying as Frankie from Foster’s Home For Imaginary Friends on Wednesday, reprising my Raven from Teen Titans, rockin’ Rocket Raccoon Friday and Poison Ivy on Saturday. Sunday I’ll repeat with the costume I had the best response from.

LoS: Are you a foodie? Any spots in San Diego you can recommend to con goers?

EBB: I’m definitely a foodie. Unfortunately the friends I’ve got to San Diego with tend to be picky eaters so we mostly ate at Rockin’ Baja Cantina! The surf/turf bucket is AMAZING. Definitely feeds 3-5. Also since I’m not currently living in CA, I’m going to be hitting up some animal-style fries from Inn N Out pretty much every night. I’m attending the Con alone this year though, so I will definitely be hitting up as many unique looking restaurants as possible. If you have any recommendations, let me know! There’s an Indian spot I’ve been interested in trying for awhile, or possibly get some sushi. YUM!

LoS: Lastly, I’m going to throw you a curveball, if you were attending a cosplay dance party, what character would you attend as? Can you do the dougie or the Bernie??

EBB: Random, I know, but I attend the Masquerade after-party every year up in the foyer area (free cupcakes and nachos PLUS a dj and con-goers in cosplay? Who wouldn’t want to spend their Saturday night there!). I’ve also spontaneously broke out in a fist pump with fellow cosplayers of X-Force in the Sega game/dance room outside the convention. If I knew I were going out to shake ‘n bake it, I would cosplay in something I feel I can groove in without worrying about a wardrobe malfunction (my Harley Quinn Alternate Injustice cosplay last year was one of those costumes.. heels and a tube top made me very stationary it was sad!). I’m thinking my Ash Ketchum cosplay, just because it’s simple to move in and I could dance as animated as I would want to. I can’t duggie (at least not in public!) but I have been taking pole classes? Yeah. Definitely notz something to break out into in public. Nevermind, I’ll just rock it like a sorority girl and continue the fist pump. Maybe Macarena. 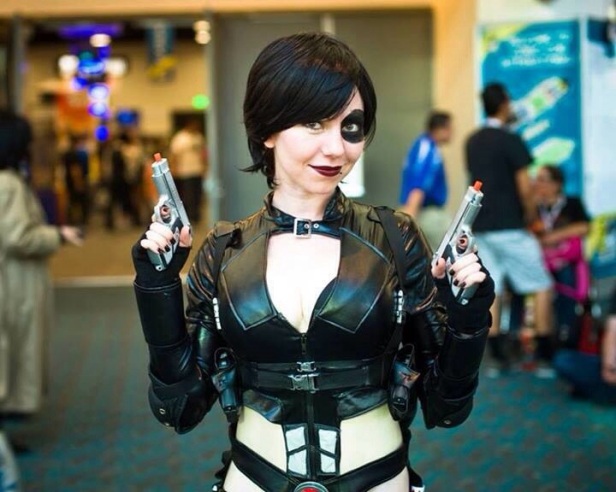 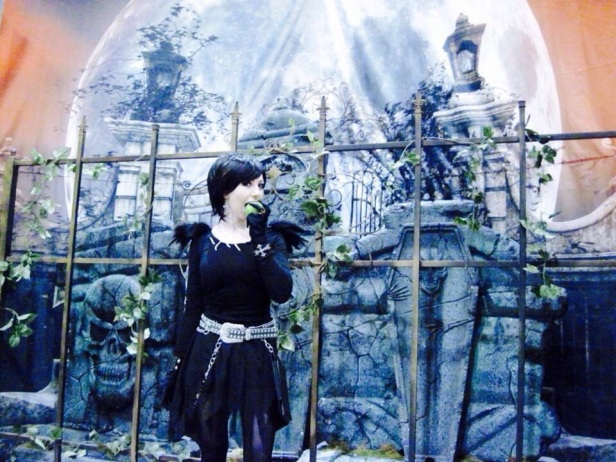 One thought on “Get to know Cosplayer Emilie Bada-BOOM”