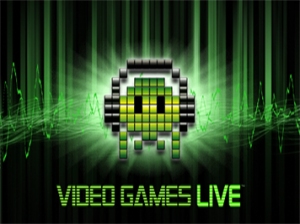 I attended the March 8th Video Games Live show at the Orpheum theater and it was a very entertaining show. First time at the venue and it feels like a blast from the past, I recommended seeing a show sometime to experience it. The show was performed by the local ProMusica Arizona orchestra which did a great job. The night starts with a Guitar Hero high score competition with the winner getting the chance to play on stage with Tommy Tallarico and the orchestra for a prize package. Also, a cosplay contest is held, with the fans selecting the winner.

I was pretty satisfied with the song selections, though I admit I really wanted to hear Mega Man (though I’ve heard it live before, the inner kid can’t get enough). It was 2 and half hour show with a 20 minute intermission thrown in. Tommy Tallarico is the mastermind behind the whole thing, he has worked on a ton of video games (his favorite being Earthworm Jim which explains the inclusion of the song in the set) and is actually the cousin of lead singer of Aerosmith, Steven Tyler. The highlight of the night for me was Final Fantasy VIII (honestly I can’t stand the game, much prefer VII or IX) but the performance was just awesome.

After the show a meet and greet is held, giving fans the chance to talk to Tommy and get merchandise signed by the composer.

If you get the chance, whether it is back here in Arizona or somewhere else, you have to check out Video Games Live if you remotely enjoy a video game soundtrack now or years ago growing up with the classics.