This past weekend saw the third annual Game On Expo take place in Downtown Phoenix. The video game convention had been held in Mesa the previous two year but like most of the successful conventions in Phoenix, they find their way downtown and Game On Expo is no exception. The new location offers a more centralized event and a more spacious venue via the Phoenix Convention Center.

The guest list has gradually changed each year. Starting off with mainly YouTube personalities to a small mix of voice actors and now a much bigger guest list of voice actors. There were guests representing such franchises such as Overwatch, The Legend of Zelda, Mass Effect, and Mortal Kombat to name a few. Add in a healthy mix of some of the most popular YouTubers in the realm of video games and you’ve got a nice collection of guests for casual and hardcore gamers. My 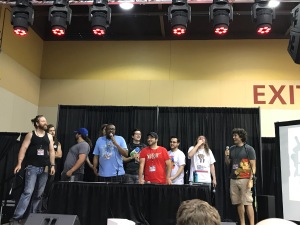 favorite part of the guest list was the YouTuber Q&A where they all hit the main stage to take questions from the audience. I was familiar with all of them and their channels so it was pretty neat to see them all together interacting with each other. Kind of like when your favorite Marvel characters finally got together.

As I previously mentioned, the convention had made to the move to the Phoenix Convention Center to take advantage of the space of the South Building. The floor was made up of different areas: cosplay tables, console/tournament gaming area, arcades, artist alley, “garage sale” type tables, autograph area, photo op area, and vendors. I don’t think they had as many exhibitors as they had hoped as there were the dreaded tables that had zero to do with pop culture but if you need solar panels for your house, you were in luck. With that said, the back of the convention center was pretty spacious so if you wanted to hang out and eat, there was plenty of space for that.

I’ve been a huge fan of Game On Expo since its inception but I feel like the floor was lacking excitement. Maybe it’s just me with SDCC still fresh in my mind but the vibe of the con wasn’t what I was expecting this year. I wasn’t a fan of having the main stage right there at the gaming area. For musical acts it was great but the panels that were held there would have benefited a change of location. The bag check area never really got too crazy as security was pretty efficient each and every time I went through the line (and that was almost a dozen times). I did enjoy the cosplay I saw because a lot of it was geared to video game characters (would you ever see a Snake Man cosplay at a normal comic or anime con?). Artist alley featured some really cool video game merchandise that were hand made by most of the artists, one table had some really neat Legend of Zelda merchandise that any fan of the series would go nuts for.

Overall, I had a good time and would recommend anyone remotely into video games to attend. I think the new space provided a few challenges but I fully expect the great staff and organizers to continue to provide one of the best conventions in the state of Arizona.