Phoenix Fan Fest is this month! Use this guide to help inform you and navigate your Fan Fest visit. This is the third year of Phoenix Fan Fest, the first time it is being held in Downtown Phoenix. If this is your first visit to Fan Fest and not sure what to expect, make sure to check out the coverage from the previous two years right here!

Fan Fest is quite a bit different this year in both dates and locations. Phoenix Fan Fest is held October 22 – 23 at the Phoenix Convention Center. If you have attended before, it is longer held in December at the University of Phoenix Stadium (say goodbye to all that free and plentiful parking). If you’re looking to purchase a badge for the two days, it will run you $40. Saturday by itself is priced at $30, while Sunday will run you $25. Sidekick badges (children ages 3-12) are $10 and children under the age of 3 are free.

Registration will open up on Saturday morning at 8:00 AM and will stay open until 7:00 PM and will reopen on Sunday morning at 9:00AM. A very important piece of information to remember is that registration will be located in room 221ABC which can be found on the second floor of the North Building. I’m sure there will be signage galore around the convention center but don’t find yourself wondering around looking to find where you pick up your badge.

Let’s face it, one of the most popular attractions at any con is the guest lineup and Fan Fest is representing several fan bases. Here’s who you can find signing autographs or taking photos (which you can buy right here) at Fan Fest.

More guests to be announced so for the full guest lineup, bang it here. 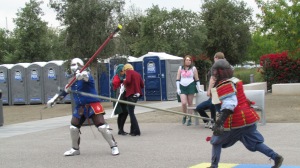 The biggest advantage of moving from the University of Phoenix Stadium to the Phoenix Convention Center is that the number of panels and programming in general able to be held. Topic of panels range from Voltron, Power Man & Iron Fist, cosplay, Stephen King, and much more. Need a little bit more interactivity? You can check out some of the programming that includes Marvel Jeopardy, a throw back to the Nintendo World Championship, Light Saber battles, and science!

You can find the majority of the panels on the second floor of the North Building, programming starts Saturday morning at 10:30 AM and runs until 11:30 PM, Sunday starts it at 10:30 AM all the way until 5:30 PM. For a full list of panels and programming, you can check out the two day complete guide provided by Phoenix Fan Fest. 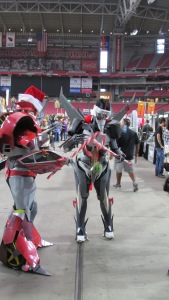 One of the interesting things about having Fan Fest in December was all of the holiday themed spins on cosplay costumes. With Fan Fest moving to October, one would expect to see some Halloween themed costumes instead. Also, Fan Fest opted not to bring back the costume contest this year, an interesting decision in my opinion as the change in location and date should help attendance numbers and in theory, number of attendees in cosplay. The community is still well represented with more than a half dozen cosplay photo meetups, several “how to” panels, and plenty of local photographers looking to do cosplay shoots.

Downtown Phoenix offers several parking garages within walking distance of the convention center. You’re best bet is the Jefferson St. Parking Garage near Chase Field and the South Building of the Phoenix Convention Center. You can pre-purchase parking for the Jefferson St. Garage via Parkwhiz for $10. Other options include the Collier Center which is right across the street but can run anywhere from $10-$20, depending on the event and the time of the day. The convention center also has its own parking garage but typically runs anywhere from $12-$20 as well.

If driving is not your thing, the Valley Metro light rail stops right next to the North Building (or South Building depending on what direction you’re coming from). An all day pass for the light rail is $4 which puts a few extra bucks in your pocket compared to using a parking garage.

Looking to stay close to action of Phoenix Fan Fest? You can’t stay any closer than the Hyatt Regency Phoenix, located directly behind the West Building of the Phoenix Convention Center. As of publication, discounted room rates for Fan Fest attendees are still available, that rate depends on how many guests and the size of the room.

Another advantage of moving Downtown from Westgate is the number of food options (and inexpensive). The convention center has its own food court in the lobby but a slice of pizza and a drink might run you $7 when you can make a quick 5 minute walk to Fired Pie and get a whole pizza and a drink for $9. Here is my custom handy dandy food map of nearly every possible place to grab a bite to eat within walking distance.

As always, make sure to follow Legion of Sand on Twitter for Arizona pop culture conventions updates, including Phoenix Fan Fest. Expect live tweet with up to minute coverage of happenings during Fan Fest. I just broke 1,000 followers so if you’re one of them, thank you!! If not, what are you waiting for, follow! 🙂