August is quickly approaching and for many in Arizona, that means our first big con since June. Game On Expo is being held August 5 – 7 at the Mesa Convention Center and for video game enthusiasts, it’s right down your alley. Last year, I wrote a series of video game articles that looked back on my gaming influences as kid, but before I get to this year’s edition, lets take a look at the guests for Game on Expo 2016.

The guest list features four categories of guests (Voice actors, Youtubers, creators/industry, and cosplayers) and we’ll touch on a few that I am excited.

In the voice actor line up, you’ve got Steve Downes who is known as the voice of Master Chief from the Halo series. Keeping with the Halo theme, the next guest is Jen Taylor, who voices Cortana from Halo but has also voice both Princess Peach and Toad from various Mario games. . Game On Expo announced Noel would not be able to attend this year. 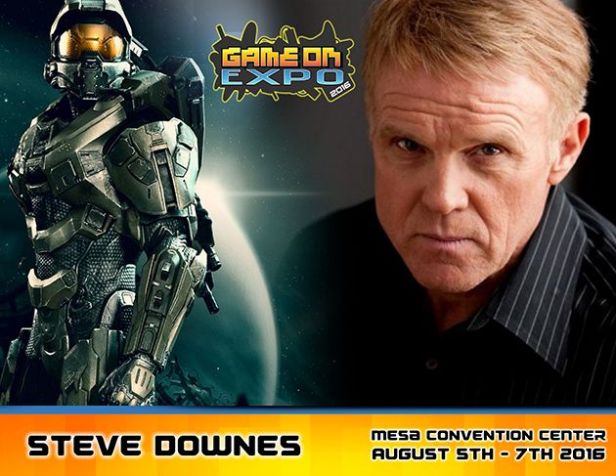 This is the part I am excited for because last year, I was only familiar with one of the Youtube content creators that were attending (The Completionist, who had one of the best panels I attended last year and is returning this year). When GoE was finished last year, I went and watched a few of videos that were put out by the guests such as The Game Chasers, The Gaming Historian, and Pat The NES Punk. Good news for me as that they are all returning to Game on Expo this year and I can appreciate their appearance now. The lineup also includes other Youtube creators such as ProJared, AlphaOmegaSin, Metal Jesus, and 8-bit Eric who have all crossed over into other shows I have watched on Youtube.

The rest of the guest lineup is rounded out by creators such as Al Lowe, who created the Leisure Suit Larry series, Thor Aackerlund, winner of the Nintendo World Championship, and a bunch more that will please fans of gaming history and the industry (also don’t forget John “Gamester81” Lester, who has a popular Youtube channel and is the co-creator/co-owner of Game on Expo!)

As soon as San Diego Comic-Con ends, I will start writing up a few more video game articles in anticipation of Game on Expo! In the mean time, make sure to follow me on Twitter for a summer full of convention and popculture coverage in Arizona.