Hey everyone! Robert here and I am back in Arizona after spending Easter weekend in Anaheim, checking out Wondercon for the second year. Wondercon is held at the Anaheim convention center, mere blocks from Disneyland which gives the convention a unique atmosphere. It lacks any kind of stressful aspect (unless you are trying to find parking during the middle of the day on Saturday) and the vibe carries across the weekend.

My Wondercon weekend started on Thursday, I swung by the convention center around 3:45 in the afternoon to pick up my badge and I was in and out within 5 minutes. I would highly suggest picking up your badge on Thursday if that is a possibility because it saves you a lot of time come Friday. The convention opened up the exhibit floor at noon on Friday, actually at 11:30, 30 minutes early to the approval of the large crowd awaiting entrance. I hit the floor and found a booth (trailer to be exact) for the upcoming film San Andreas, and jumped in line for whatever it was. It ended up being a 3 minute trailer in Real D (which means vibrating seats) which was very underwhelming. I saw the line stretch pretty long throughout the weekend and felt bad for the people waiting, probably not knowing what they were waiting for.

I ran around the exhibit floor checking out some of the bigger booths such as Capcom, Nintendo, Loot Crate, Nerdist, to check for exclusive stuff or swag giveaways. The exhibit floor was divided into three sections: artist alley, comic and merchandise vendors, and company booths like the previous mentioned booths (although there were some intermingling in each area). 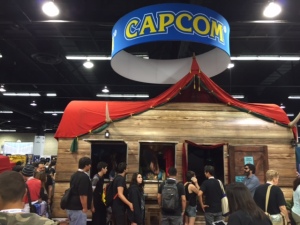 My Friday panels started with a spotlight panel on Wondercon guest Neal Adams. If you haven’t heard Neal Adams speak about comics before, I would highly suggest either attending a panel or check out his two part interview with Kevin Smith on “Fatman On Batman”. He started off the panel by walking around the room with “Batman Odyssey” showing everyone a two page splash page of Batman, using a gun, and blasting a hole through someone. His point was that it has never been seen before and don’t jump to conclusions, to buy the book and find out what happens. Most of his panel were stories I had heard before such as his dislike for Man of Steel, how John Stewart came to be in Green Lantern, his thoughts on the new Wonder Woman and her lack of rear end (this came with a little bit of an uncomfortable laugh from the audience) and a couple of others.

After having a bite to eat at the food trucks parked out side of the convention center, it was time to head to the next panel of the day, “The Last Man on Earth” panel featuring star Will Forte, and writers Chris Miller and Phil Lord. I got into the room a little early and caught the last 10 minutes of the Wayward Pines pilot and then the panel with a few of the actors. Last Man panel started off with the screening of the next episode which was followed by a Q&A with the trio. Miller and Lord for not really being in front of the camera, had a lot of questions directed toward them about topics such as the Lego Movie, a possible season 2 of Last Man, and a few other questions.

That was the extent of my Friday at Wondercon besides walking around the exhibit floor and getting pictures of awesome cosplayers. I’ll be uploading a few clips from some of the panels so stay tuned for that!