“Orphaned as a child in Eastern Europe, Ophelia Sarkissian was taken in and raised by the evil underground agency Hyrdra. Excelling in her rigorous training over the next two decades, Sarkissian rose through the ranks of the shadowy organization and was bestowed with the exalted title of Madame Hydra. Now as one of the preeminent players in Hyrda, she will stop at nothing to further her group’s wicked agenda of world domination.” 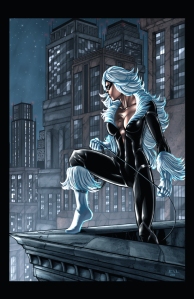 “Following in her infamous father’s footsteps, New Yorker Felicia Hardy put her years of training in acrobatics and martial arts to use as a masterful cat burglar. After amassing a small fortune in stolen goods, Hardy decided to play up her increasingly notorious reputation, donning a sleek costume and dubbing her the Black Cat. Though not evil, Hardy’s selfish lust for wealth has caused her to rob, con and take advantage of anyone foolish enough to let the Black Cat cross their path.”

“A chance encounter with an alien being granted ace U.S. Air Force pilot Carol Danvers incredible powers. Endeavoring to use her fantastic new abilities for the forces of good, Danvers joining the super hero community in their ongoing struggle against evil. She now valiantly aids her fellow heroes as the intrepid Captain Marvel!”

Get your tickets here and use the coupon code BLOG3 to save a few dollars off your purchase!